Shutters are as ubiquitous as sunshine and crystal clear blue water among those countries whose shores are kissed by the Mediterranean Sea. These decorative window covers are believed to have made their first appearance in Ancient Greece. From there, their popularity has since spread to most nations of the modern world. However, it’s in the countries much closer to their origin, such as those that once comprised the former Yugoslavia, together with Austria, Switzerland and Germany, that their positioning on the outside of homes, cafes, restaurants and other small businesses continues to be most common.

Elsewhere, in modern times shutters are more often seen adorning the inside of homes where, though their purpose remains much the same, their aesthetic qualities may now be enjoyed by their owners and not solely by those who happen to be passing by. In their original form, they were often ornately carved and brightly painted and in those that were actually equipped with slats, they were fixed at a set angle and could not be adjusted. Today’s products successfully combine an air of tasteful elegance with the benefits of greater functionality. 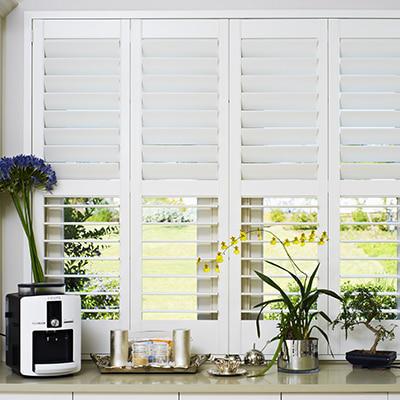 Shutters have become a popular décor item in Western Countries such as Australia, South Africa and the USA. In countries with a similar climate to the previously mentioned countries, shutters also serve as a simple mechanical means with which to control the internal environment. Closing the slats acts to limit the entry of sunlight when it’s at its brightest and hottest, opening them again only when the outside conditions return to more comfortable levels.

In the hot and humid coastal districts of South Africa, these fitments can provide the occupants of a home with welcome relief. The advantage of shutters, unlike air conditioners, is that they require no power. Shutters, the like of which are currently available from Top Carpets & Floors outlets, are also a means with which to protect your privacy whilst at home. They serve as a highly effective barrier to prying eyes whilst still admitting sufficient light for occupants to continue with their viewing, reading and other activities without any need for electric lighting.

As well as having migrated to the interior of the home, the modern product is no longer confined to windows. You will now find them adorning doors and even substituting for a door, to an en-suite bathroom for instance. Try our exhibitor, Top Carpets and Floors for wood-grain patterns and fashionable shades of grey and white that make these fashionable modern shutters totally irresistible.

Acquint Yourself with the 2020 InHabit Judges

The Johannesburg HOMEMAKERS Expo is known for showcasing top…

Cape Town HOMEMAKERS Expo exhibitor, AssembLIT has been designing and…