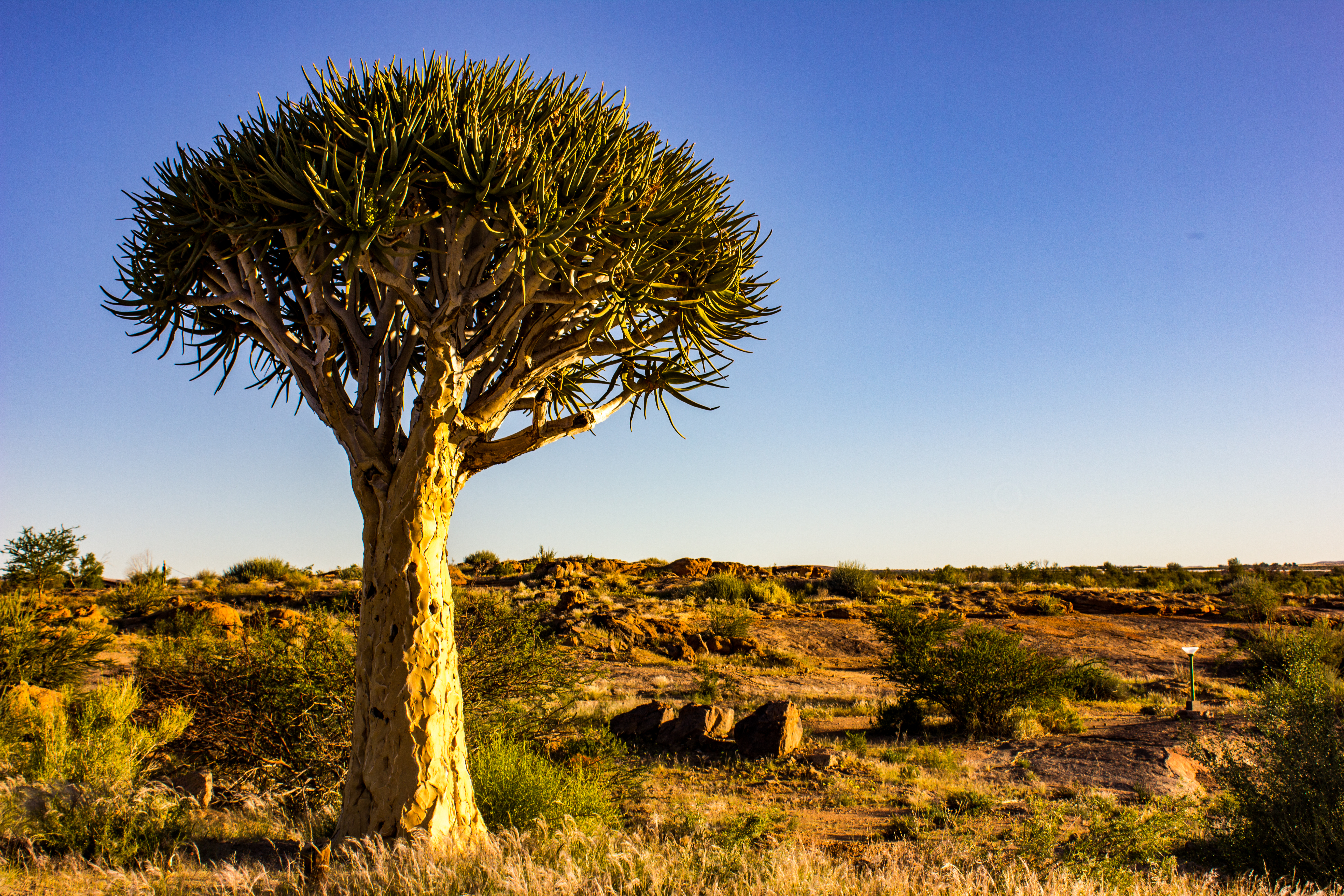 Wanderlust: Wayward Westward on the N14

The N14 will take you all the way from Joburg in Gauteng to the most North Western point of SA to Alexander Bay. 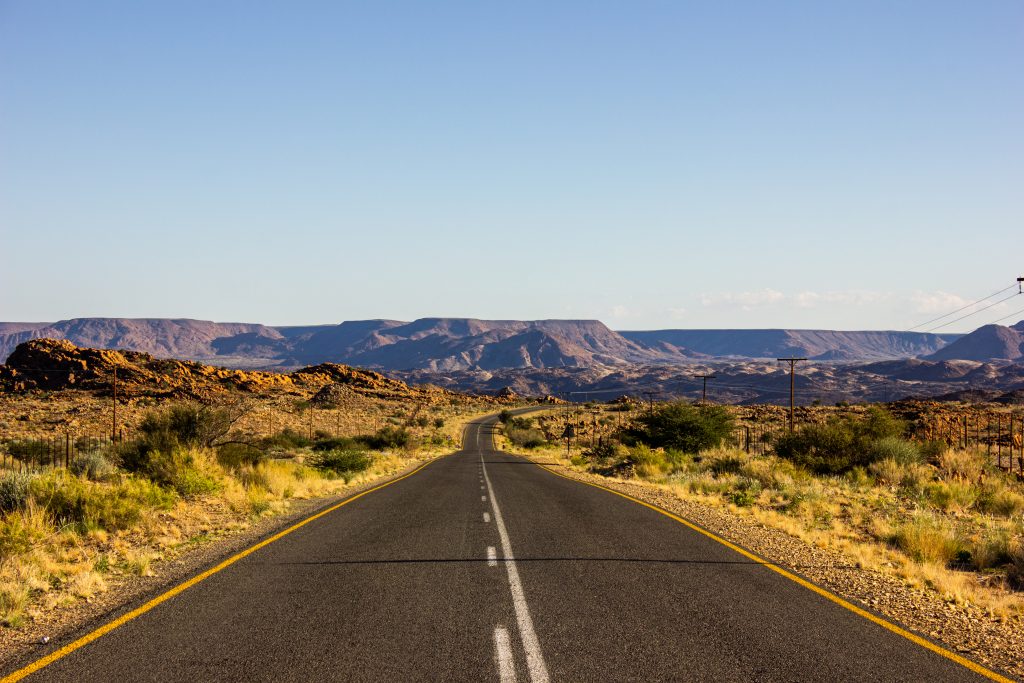 A stretch of land that sometimes feels like not only another country but another universe. Leaving you in awe of this land’s changing faces and moods, from rows and rows of person-high mielies and sunflowers to kilometre after kilometre where nothing grows knee height, to be suddenly rewarded by a carpet of petite flowers stretching all the way to the horizon. Flowers that seem so delicate and dainty you think the wind will just dandelion them to the clouds. A clever deception as these little pretties strut their sexy stuff in some of the harshest growing conditions. Soon the landscape changes again to what can only be described as moonscapes with gale-force winds, deep desolate valleys of almost black rocks just to be transformed again into sandy dunes on one side and the darkest blue ocean on the other.

If ever you want to see this motherland of ours showing off in the most unpretentious way, you need to make this trip. It runs through three provinces, over 1400 kilometres and ends at the Atlantic ocean on the Namibian border.

As is the case with many of our road trips, this one is unplanned, we wake up the first morning of a long weekend, have breakfast and promptly decide “It’s road trip time”. Have a quick look at Google Maps and decide that we’ve not seen the Augrabies Falls and now is the time.

Leaving the Northwest province behind (another road trip story for another day) our first stop is Kathu. A predominantly mining community in the Northern Cape and we did not book accommodation in advance so we’re left in a bit of a lull to find something, all the B&B’s are full. In Kathu, who knew? We ended up at a really expensive looking lodge, and we are sure we cannot afford this. The receptionist gives us one look, and with a subtle wink gives it to us at half price on account of our big family! Welcome to Northern Cape hospitality, the first of many small acts of kindness we experienced on this trip. Side note, Kathu won the Town of the Year competition and that night we could not agree more. They serve a pretty decent steak in a “Kathu meets Texas” kind of way. Growing up as a child whenever we wanted to say something was far away it would always be from Kathu, it’s really not.

Upington is an eye-opener. It’s a buzz, much bigger than you would imagine with wide, clean streets and what must be the weirdest solar plant. The Khi Solar One is a 205-meter high tower with what can only be described as many huge mirrors that catch the sunlight, shines it back onto the boiler situated on top of a tower that then turns it into steam, generating electricity. (If you like facts, its 4000 mirrors cover 576 800 m2, creating 50 megawatts. You can power roughly 160 homes with 1megawatt, that’s a lot of Sunpower). Should you not have Google to search for what it is, you might be mistaken to think it a set for an Austin Powers movie and this is part of Dr Evil’s lair. 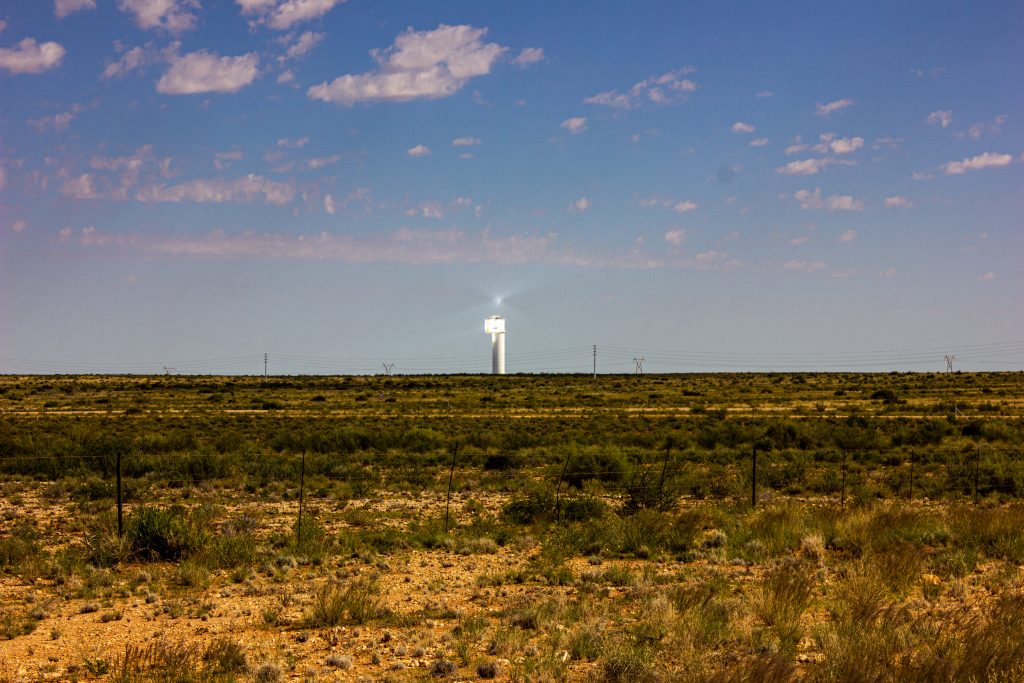 Augrabies Falls was worth the trip. It is beautiful, powerful, noisy and makes you realise how small you are in the bigger scheme of things. We are very fortunate as our arrival coincides with heavy rainfall in the Cape, pushing the Orange river in all its glory over the falls. It was magnificent, and the hospitality from our host that night matched this splendour. Being typical Gautengers we thought we would just catch dinner in a nearby restaurant. So, after a long day on the road, sunburned from the falls and dusty from the lovely red Kalahari sand, we arrive at our overnight stay with two bread rolls and a packet of chips in the car. We inquire about the nearest restaurant just to be told there aren’t any and the nearest takeaway, some 80km away, will be closed by the time we get there. At which point our host very graciously offers to make us dinner. What a feast! To this day, one of our best road trip dinners is individually prepared potjies of lamb and fresh bread. Another Northern Cape act of kindness. 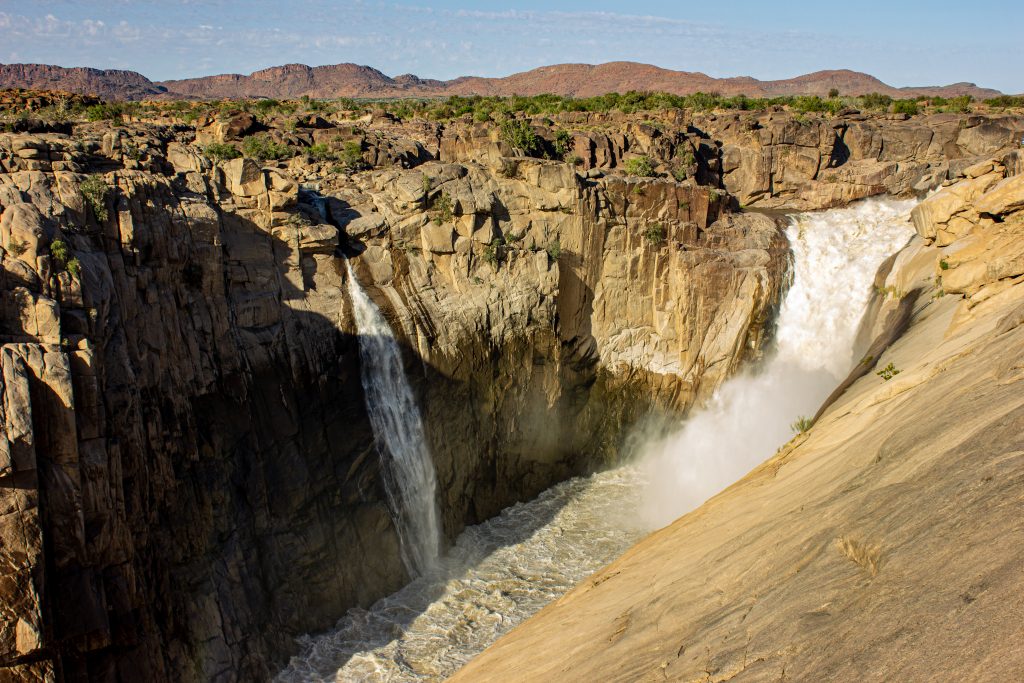 The next morning, we set off on a little detour, a secret mission so to speak, our host let us in on a local secret, not often visited by tourists, Blouputs. A tiny village between Augrabies and Riemvasmaak, it boasts a huge pass and spectacular views of the rocky landscapes, Orange river, grape and citrus farms.

Pofadder, a word that just seems to roll with ease off your tongue, a little town that has been the butt–end of many a joke and now we are also part of that special club. This is where we experienced the most surreal lunch, ending in belly-aching laughs. In hindsight, it was not one big thing that went wrong but several small things. I’ll spare you the details as I guess this is one of those you-had-to-be-there stories. In broad strokes; a skipped breakfast (remember no restaurants in Augrabies), the nearest town being Pofadder, five hangry travellers end up in an establishment where the owners are away for the long weekend, the chef is clearly hungover, the waiter on his first day and the pantry empty, every request is met with an out-of-stock answer. You end up asking, okay, just give us five of what you do have – enter centre stage. Two hours later, tower high burgers where the garlic steals the mince’s thunder and let’s just say, turns out to be the gift that keeps on giving. For weeks after our return home, when you opened the car door, Pofadder said HELLO!

Picture the Cape or even KwaZulu Natal coastline, now the Namaqualand coastline is nothing like that. On approach to the town, we played the age-old game of who can see the sea first. Not easy as the meters and meters of sand dunes have you mistaken that the sea is around the corner, but it is not. Not even any lush greenery to announce its imminent arrival, and as you’re about to give up, there it is. But don’t let this description or the lack of first impressions deceive you, this is a laidback little town that will have you wanting to stay longer. The ocean is a bit too cold for swimming, but the beaches are great for long walks, the people are warm and friendly with an accent unique to this area. Port Nolloth residents are quick to smile and slow to everything else, and if you think about it, maybe that is just what the world needs. 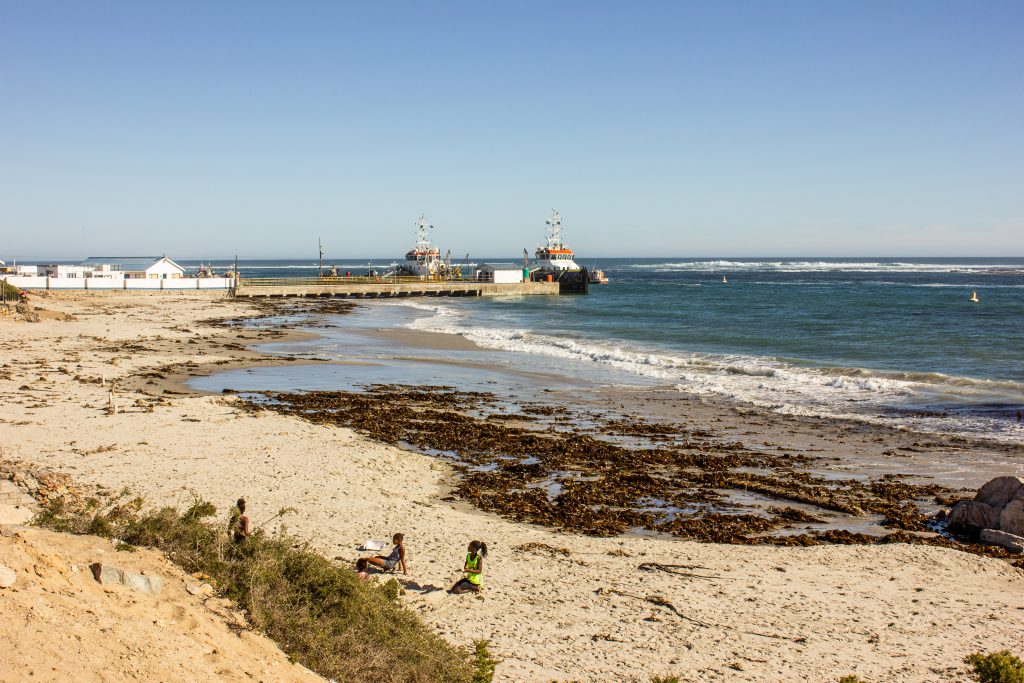 Several (S E V E R A L) towns in the Northwest Province, towns sounding of German descent, old Boer war generals and ladies who surely was somebody’s sweetheart –  won’t tell you about them now, that’s another road trip story for another day. 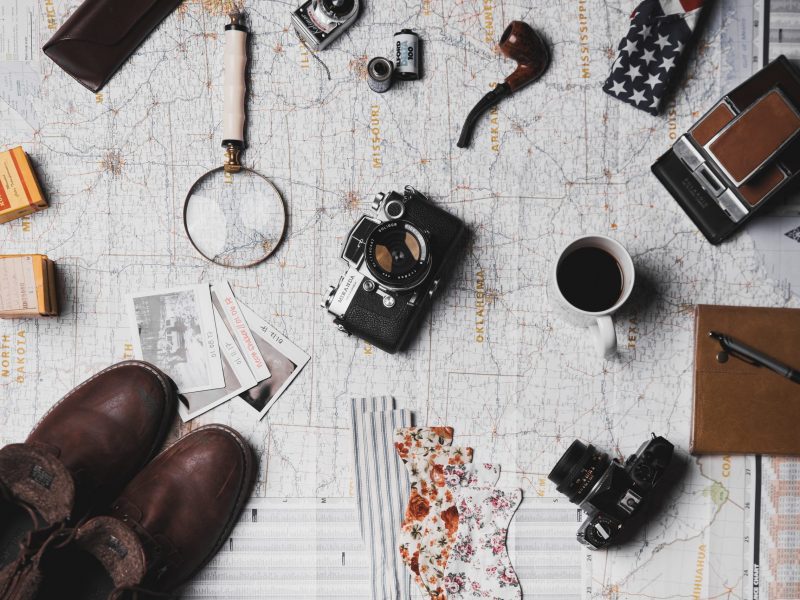 The Travel Life Team on Taking a Break 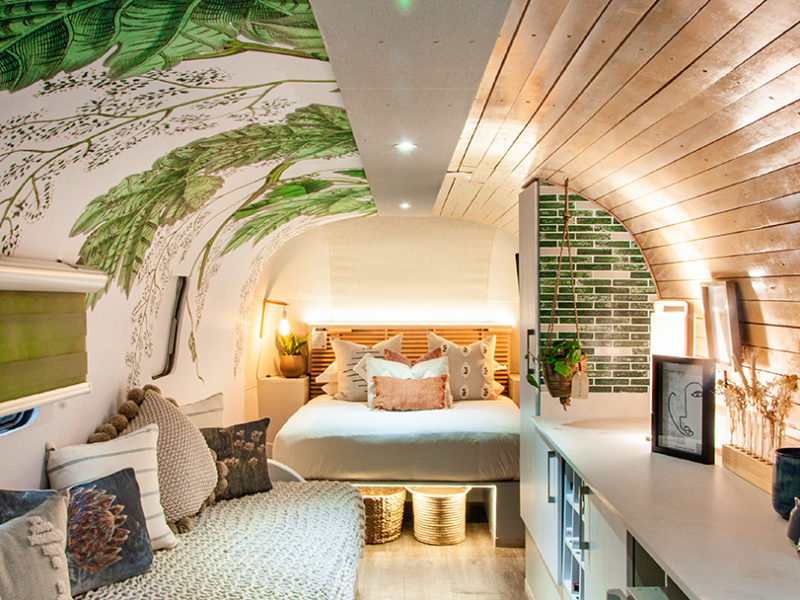